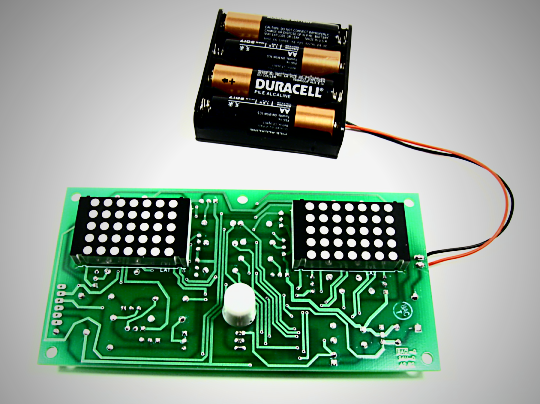 This is a kit that was developed by Sinister Circuits and offered by Club Jameco. Jameco discontinued it because they ran out of the LED arrays, used in the kit.

It featured a pair of inquisitive animated “eyes” that are both spooky and funny. Add the optional motion sensor and the eyes look forward whenever someone wanders by—especially cool when many eyes are involved. Sinister circuits is, currently, developing an Arduino Shield version of the Animated Eyes -- stay tuned! 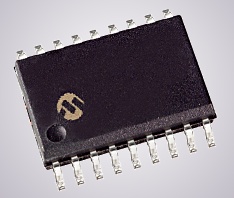 The PIC microcontroller that drives the eyes is not included with the kit. You can either purchase a blank and program it yourself (get the HEX file, below) -- the PIC MCU (PIC24HJ12GP201) is carried by these friendly vendors:

Or you can purchase an already programmed part from us [Sinister Circuits] (see "Programmed PIC", below).

Also, if you want your eyes to be interactive, then you'll need to purchase a PIR [motion] sensor (not included in the kit). You can get it at one of these fine vendors:

Why Up To One Week Delivery?

I get around 1 of these orders per year and now and then a day or two can pass before I even notice the order [your order, in this hypothetical]. In most cases I’ll have it out to you by the same, or next day. Then it’s just a matter of how long it takes USPS to get it to you. Feel free to prod me with an email or two if it seems like I’m neglecting you ;) You can use the email address provided by PayPal, or you can use the Contact Us form.

I’m just some guy that thought it would be fun to offer a project via Club Jameco. Being a lone hobbyist, I have limited resources. For instance, Jameco is the only source I have for those black background LED arrays (other than buying them from the manufacturer at quantities containing enough zeros to shuffle the eyes into next Tuesday). And, in fact, Jameco quanties have reached exactly one zero, which means the eyes you receive will, likely, have something other [probably a gray background]. And, eventually, the LEDs may even be a color other than green.

Also, I can’t always get the PIR in white.

Another example is the battery holder shown in the photo. A few of them have, in my experience, succumbed to the pressure exerted on the plastic casing by the battery, via the spring. The plastic actually tears! So, in the last few orders I’ve substituted a different holder that is not flat, but, instead, holds the batteries in a "bundle like" configuration.

Let me know if you need it to look more like the photo and I’ll try to accommodate you -- might cost extra, though. Use the Contact Us form for inquiries.

Why Up To Three Weeks Delivery?

I get around 1 or 2 of these orders per year. In fact I’ve gotten only four, so far, as of this writing. Occationally, a day or two can get by before I check my email. Once I do see your order, it will go out that day, or the next day, at the latest. Then it’s just a matter of how long it takes the USPS to get it to you. Feel free to prod me with an email or two if it seems like I’m neglecting you ;) You can use the email address provided by PayPal, or you can use the Contact Us form.